Tiger & Bunny Wiki
Register
Don't have an account?
Sign In
Advertisement
in: Characters, Superheroes, NEXT,
and 3 more

Fire Emblem is a flamboyant hero with flame abilities and is equipped with a highly maneuverable race car. They are also the owner of their own sponsor company, "Helios Energy", and their costume contains advertising for FMV of Fujitsu.

Nathan grew up in what seemed to be an all-boys boarding school. Throughout their youth, Nathan was bullied and shunned for displaying interest in feminine things like rings and makeup. Boys would vilify and harass Nathan for expressing interest in them. Even Nathan's parents seemed to resent their child. At some point before the series, it seemed that they tried to present themself much more femininely, growing out their hair and wearing dresses. This probably made Nathan afraid as when it's shown, Nathan remembers being glared and gawked at by people as they passed by.[5] Nathan has stopped presenting themself in such a flamboyant style. However, Nathan still views themself as feminine and enjoys being considered one of the girls, and has accepted themself as they are.

Nathan wears distinctive pale pink lipstick and eye shadow and paints their nails, whether in or out of uniform. They are usually training and spending most of their time with the heroines. Nathan is very flamboyant and flirts with the male heroes, often making them such offers as "I'll give you a big kiss when you get back." Their nickname for Barnaby is "Handsome", using the English word. Nathan flirts with Tiger a lot: they offer to "sleep beside" Tiger (who turns them down, saying he'd get a stiff neck from using Emblem's arm as a pillow), and snuggled into him while they discuss the enemy fire user. They do similar things to Barnaby and Rock Bison, often referring to Barnaby as handsome and touching Rock Bison inappropriately. They are very self-confident and enjoy cutesy and feminine things such as cute teddy bears. Pao-Lin describes them as being "strong as a man and gentle as a woman". Though normally speaking with a high pitched voice, when angered they revert back to a more masculine intonation. They seem to prefer peace among the heroes and enjoy giving love advice and acting as a sort of big sister to the other heroes, especially the female heroes. They are loyal to their friends and possesses a strong sense of justice.

Despite their flamboyance and carefree attitude, in the second Tiger and Bunny film, it is revealed they were ostracized for their interest in men and femininity. This implies that despite their confidence and freedom currently, their past rejection by their peers and family still haunts them.

They are shown to have a rivalry with Lunatic due to their fire powers and asked Barnaby to teach him a lesson on their behalf.

Nathan is excited about Wild Tiger's and Barnaby Brooks Jr.'s return to the First League. They are shocked and upset to learn that Mark Schneider has fired Wild Tiger and replaced him.

When Virgil Dingfelder and his team begin reenacting the legend of Sternbild City's Goddess, Johnny Wong traps Fire Emblem in a nightmare that forces them to relive and confront their past trauma and fears.

Nathan remembers being bullied by other students at the all boys boarding school they attended as a child for their romantic interest in boys. They also remember experiencing dysphoria, trying on women's jewelry, and being mocked while presenting more femininely wearing a dress and having long hair. Nathan's parents appear in the nightmare and shame them for their identity. Visions of their schoolmates and their younger self follow and mock them.

Meanwhile, Johnny Wong mocks Fire Emblem as he fights Dragon Kid, who becomes angry and vehemently defends them, calling them the strongest person she knows. Nathan hears this on the TV in their hospital room and is able to overcome the nightmare. They wonder why this was still bothering them then declare that there is nothing wrong with them, they are glad they were born this way, and they love themself.

Fire Emblem arrives to help Dragon Kid and Blue Rose fight Johnny Wong, at one point shielding Blue Rose with their body when he attempts to continue attacking her while she's unconscious. The three finally defeat him by combining their powers in a single attack.

Fire Emblem arrives with the other Heroes to help Wild Tiger and Barnaby Brooks Jr. defeat Virgil Dingfelder. They cheer with the others when Wild Tiger is reinstated and help clean up the city. During the credits they are seen siting at the desk in their office, smiling as they watch a video from their school days.

When Mugan and Fugan attacked heroes in Oldhabi, Magical Cat comments its a town that Golden Ryan used to work, but he doesn't care. Dragon Kid finds that being cold by him, however, Fire Emblem states its more complicated. They explains that he worked as superhero in Stern Bild for a while, but got an offer from a rich guy in Oldhabi and left to work there. One day, he chased a criminal named Gregory Sunshine, who power was to cause other NEXT to lose control of their powers. He attacked Ryan and caused his power to go out of control and making him take down one of the monuments in town and cut Ryan's back. However, no one came to help him as other heroes saw him as rival and not a teammate. Sky High realizes that's why when Ryan returned to Stern Bild, he said that he felt people here won't betray him.

Sky High and Fire Emblem are labelled as the top superhero buddy duo who will attend the opening ceremony of a new attraction Vinculum.

Fire Emblem wants to speak with Tiger and Barnaby. Fire Emblem explains that ever since they became buddies, they have been more busy, but also became better friends and have time for themselves. Tiger keeps interrupting Fire Emblem guessing what the problem is, but he gets it wrong each time. In the end Tiger states it sounds there is nothing wrong between them and Fire Emblem states that this is exactly the problem and that Sky High is too perfect and is wearing Fire Emblem down as they try to always be good person around him. Fire Emblem wishes to see some of the shortcomings that Sky High has, but they can't just tell him to stop doing right things. Tiger suggests that Fire Emblem should be less careful around Sky High and say what they want to say. Tiger then notices Sky High behind Fire Emblem, who acts weird stating he didn't hear anything and returns a towel to Fire Emblem.

Sky High misses the morning exercise and calls Agnes Joubert, requesting that Tiger and Barnaby to help out with the opening ceremony of Vinculum as he doesn't feel confident he will be able to make the event a success.

At the opening ceremony, Sky High is a bit late as he was attending another show before that. Fire Emblem tries to apologize, but then Mr. Black and He Is Thomas arrive with their manager, who explains they will be joining them as well. Agnes is against it, but Sky High accepts the help. At the ceremony, the heroes get asked questions by the crowds, but the questions are mostly directed at Barnaby. A woman then wants to all everyone and Mr. Black gets excited there is a question for him, but a man interrupts the woman, stating to curse the heroes. Mr. Black is annoyed from what the man said and yells at him, but Sky High apologizes and wishes to continue, while ignoring the man. He tells Mr. Black that the crowd is frightened and heroes don't act like that. As they prepare to continue, an accident occurs and causes some debris to start falling. Mr. Black uses his shield ability to protect the man. The heroes then start evacuating people, while also dealing with the debris. As a large piece is about to fall and there are still too many people left, Tiger and Barnaby launch Fire Emblem towards Sky High and with combining their powers, they manage to strengthen the structure and stop it from breaking. As they fly, Sky High tells Fire Emblem that he isn't perfect and was trying too hard for Fire Emblem to like him and be good buddies.

After Vincent Carl is arrested, Fire Emblem decides to join Sky High and patrol the streets. Fire Emblem sees Mugan in his vehicle and tries to tell him that he can't get in without permission, but Fugan then punches Fire Emblem and defeats them with a single hit and later petrified.

Fire Emblem has the power to generate and control fire (pyrokinesis). Their powers allow them to manipulate fire as though it were partially solid as shown by their ability to collect a stream of flame into a denser fireball. They also have one of the fastest power activations, as they are shown to be able to launch a powerful jet of fire with just a flick of their pinky. Fire Emblem is also a highly skilled driver, as they are able to dodge a hail of machine-gun fire while in their car[6].

Fire Emblem also has one of the strongest abilities and it doesn't seem to take much effort to increase the level of fire; their only competition is Lunatic, who has blue flames, which are stronger than their red flames. Nevertheless, they are a powerful NEXT who is able to activate their powers with ease.

Fire Emblem's costume is of the typical hero style. Despite the fact that they do not fly, they possess a burning cape, which they can turn on and off.

Like all the Hero TV heroes Nathan wears a simple "communicator" wristband which Agnes can use to contact them, usually to inform them of a crime being committed. The other heroes can also use this communicator to call them. Nathan's communicator is white with orange bands around the edges.

Fire Emblem's costume design in the series and Tiger & Bunny: The Beginning.

Nathan's design in the series and Tiger & Bunny: The Beginning.

Nathan in the 1st Tiger&Bunny opening.

Nathan in the 2nd Tiger&Bunny opening.

Nathan in the 2nd Tiger&Bunny ending.

Nathan and Kotetsu are attacked by a mecha with a powerful flamethrower.

Nathan ignites a small flame on their pinky to light their way.

Fire Emblem cuddles up to Wild Tiger as they ride with him and Barnaby.

Nathan snuggles up to Kotetsu while discussing a case in episode 6.

Nathan gets serious when Kotetsu is attacked.

"Maybe what this job needs is a woman's touch." - Barnaby convinces Nathan to help with baby Sam in episode 9.

Origami Cyclone and Rock Bison hitch a ride to the crime scene with Fire Emblem. 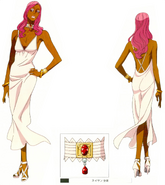 A younger Nathan, when they tried to present more traditionally feminine.

Community content is available under CC-BY-SA unless otherwise noted.
Advertisement